The Line in the Sand for Global Carbon Emissions

This is the first in an ongoing series of blogs in which we offer perspective on issues related to the implementation of carbon pricing mechanisms, the game-changing impact those mechanisms will have on users of industrial combustion processes, and the ways in which you can turn the inevitable into a competitive advantage.

Businesses that rely on the use of industrial process combustion should be fully aware that the use of carbon pricing policies (e.g. carbon tax or emission trading systems) as a means to reduce greenhouse gas (GHG) emissions has gained significant traction in the past couple of years.

According to The World Bank, 39 national jurisdictions and 23 sub-national jurisdictions (equating to nearly a quarter of global GHG emissions) have implemented, or are scheduled to implement, carbon taxes or emission trading systems. In North America, carbon pricing mechanisms have already been implemented by California, British Columbia, Alberta, and Quebec, and those jurisdictions may soon be joined by Oregon, Washington, Ontario, and Manitoba. 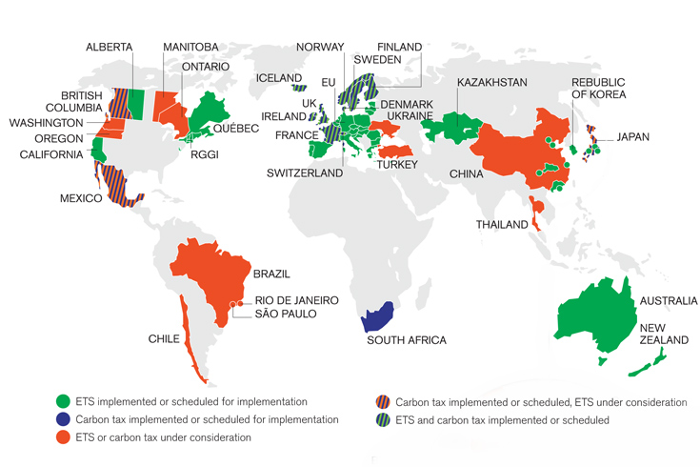 U.S. President Barack Obama, a supporter of carbon tax, is quoted in a June 2014 New York Times interview as saying the one thing he would like the U.S. to do to address climate change is put a price on carbon.

At its core, putting a price on carbon is about internalizing the negative environmental costs of carbon emissions: compromised air quality, increased health care costs, damage to crops, etc. Requiring companies to pay a cost for these impacts (i.e., internalize them) is a basic aim of environmental regulation. Yet we have only recently begun seeing this economic mechanism applied to carbon emissions.

Putting a price on carbon by implementing a carbon tax is politically challenging at best, but the political will to address global GHG emissions is growing stronger, and it seems inevitable that carbon pricing mechanisms will become the norm.

So what GHG reduction targets are world governments aiming to meet? Where will they draw the line?

Let’s consider current GHG reduction targets. The gold standard for climate science information (including target setting) is the Intergovernmental Panel on Climate Change (IPCC), which was established in 1988 by the World Meteorological Organization and the United Nations Environment Program. The IPCC’s stated purpose is to review and assess the most recent scientific, technical, and socioeconomic information produced worldwide, relevant to the understanding of climate change.

Back in 2007, the IPCC proposed that 450 parts per million (ppm) of C02 Eq in the atmosphere was the upper limit to avoid dangerous climate change. The IPCC concluded that emission scenarios leading to this concentration of CO2 (or lower) in 2100 would be likely to maintain warming below 2° C over the 21st century relative to pre-industrial levels. That is the maximum temperature rise that parties to the U.N. Framework Convention on Climate Change (UNFCCC) agreed to commit to in 2010.

The latest report by the IPCC (released in November 2014) has provided the world with a stark timeline if we wish to maintain warming below 2° C. Specifically, the latest IPCC assessment report says that Emission scenarios leading to GHG concentrations in 2100 of about 450 ppm CO2 Eq or lower are characterized by 40%-70% global anthropogenic GHG emission reductions by 2050 compared to 2010, and emission levels near zero or below in 2100.

In other words, the IPCC is urging seriously drastic emission reductions by 2050.

With 2050 looming, it is prudent to ask whether there is a consensus on this timeline. Many climate experts believe that the IPCC target of 450 ppm of CO2 Eq is actually too high, and they advocate for 350 ppm as a maximum safe concentration; a goal that would require even tighter timelines.

Since we have already passed this threshold (we are currently at 400 ppm CO2 Eq, and adding 1-2 ppm each year), supporters of the 350 ppm target argue that vast emission reductions need to happen now, not by 2050. Among those who support 350 ppm as a long-term target are British economist Nicholas Stern; the former head of the NASA Goddard Institute for Space Studies, Dr. James Hansen; Al Gore; Desmond Tutu; Canadian environmentalist David Suzuki; and even the IPCC Chairman, Rajendra Pachauri, who is the U.N.’s top climate scientist.

“As chairman of the Intergovernmental Panel on Climate Change, I cannot take a position because we do not make recommendations, Pachauri told The Guardian in 2009. But as a human being, I am fully supportive of that goal. What is happening, and what is likely to happen, convinces me that the world must be really ambitious and very determined at moving toward a 350 target.”

Regardless of whether the target is 350ppm or 450ppm, the immediate course of action is the same: substantial reductions in global anthropogenic GHG emissions, without delay!

What this means for users of industrial combustion processes is that the time is now to begin preparing for a price on carbon. It is not an issue that will go away, and it is best addressed ahead of the curve.

How do you address it? By improving the energy efficiency of your furnace, which in turn reduces GHG emissions. That means you get the cost-saving benefits of reduced energy use as well as a head-start in complying with regulations that seem almost certain to be become standard in the not-too-distant future.

How efficient are your industrial combustion processes now? If you’re not sure, why not have them assessed. Firebridge is glad to provide a complimentary consultation.

Image courtesy of The World Bank.